Octovision builds a name for itself in construction sector

Drone videographer Octovision Media is building a name for itself in the UK construction sector following a number of contract wins.

When consulting engineers Alan Wood and Partners needed high quality images and film of the River Hull to inform their inspection survey of the river’s flood defences, Octovision Media provided the perfect solution.

In all, Octovison Media filmed the exterior walls and roofs of eight buildings and sites on the city centre banks of the River Hull, providing 4k HD images and video of each to support the inspection analysis.

Chris Fenton, director of Octovision Media, said: “These river bank buildings were mostly in very bad states of repair and in locations that were difficult and expensive to access using traditional methods such as cherry pickers and scaffolding.

“We were able to give a bird’s eye view but also took the drone down much lower to capture images of the buildings and flood defences at river level.”

Ed Houlton, Chartered Building Surveyor, at Alan Wood & Partners, said: “It was much safer, quicker, cheaper but equally effective to use aerial drone film and photography to inspect the existing buildings state-of-repair than using other types of access – and the quality of footage was of a very high quality, allowing us to get a full picture of the buildings surveyed.”

The job for Alan Wood & Partners, which took place in the spring of 2018, is part of the River Hull Flood defence scheme project being run by a joint venture of BAM Nuttall and Mott MacDonald. This involves the design and construction of new defences at a number of locations along the River Hull, as well as upgrading the existing defences. The work will help ensure the existing river defences continue to reduce the risk of flooding in the city, which suffered severe flooding in 2007 after prolonged rainfall. 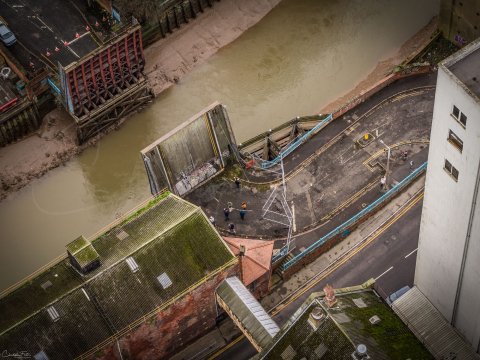 Octovision are a professional drone videography operators based in Hull,

HOME
SERVICES
SERVICE SECTORS
OUR WORK
ABOUT US
NEWS
CONTACT